Living at the Edge
of the World

NOTE: In the following excerpt Tina and April are arrested after April throws a quart of milk at several Hispanic men who have harassed them in the station's waiting room.

In the back of the Metro North precinct, in Grand Central's balcony, is a cell, and that's where they put April and me. I knew one of the cops who arrested us; it was Officer Borden. April knew both of them. They had both arrested her a few times before.

April right away lay down on the floor. She still wasn't feeling good. "I might puke," she said.

"No," she said. "Because I'm not pregnant anymore."

"What do you mean, you're not pregnant anymore?"

"What the hell do you think I mean?"

"You had an abortion." I looked down at her. She was flat on the floor with her jacket under her head and her hands on her stomach, staring up at the top of the cell bars. I could see tears start in her eyes.

"I have brandy. A bottle of blackberry brandy in my jacket. Maybe that'll help your stomach."

They let me out after about an hour, let me sit in the office with them after they finished typing up all the information, like my name and my mom's address and stuff. April was passed out on the floor of the cell, probably from the brandy on top of all that dust. The cops knew I had the bottle. They didn't care. In fact, I even offered them some. They said, "No thanks, we don't want to catch anything," so I polished it off myself, right in front of them.

It was late at night and Borden and this other cop, Mansky, were the only cops around. They were joking with me, telling me how lucky I was because I was seventeen and could still get away with a lot of shit. "Once you're eighteen," Borden said, "you'll go to Rikers and the women there will eat you alive."

Mansky said, "Yeah, you and April are going to be somebody's dessert."

"Well, you didn't have much luck today, did you? In fact, we've got to ship April over to Central Booking for this, because she's got an outstanding warrant on her."

By then I was feeling no pain. I was dozing off at Mansky's desk when Sergeant Johnson came in. He was a short guy, deep voice, black hair in a crew cut, he looked like a Marine. I didn't know him too well, but he knew April. When he saw her sleeping in the cell he said, "Oh, I see our star boarder is back."

I heard the other cops telling him about the Spanish guys and the milk and all, and then I think I dozed off because the next thing I knew the sergeant was shaking me and telling me it was time to take a shower. I said, "But when are you going to let us go?"

"Soon," he said. "We got a certain amount of procedure before we can release you. First the shower."

I didn't think taking a shower was part of procedure, but hey, what did I know? Anyway, I was too out of it to question anything.

Sergeant Johnson took me up to their locker room on the floor above, where the shower was, and Borden and Mansky came, too. The hot water felt good. I couldn't remember the last time I took a real shower. And I was high enough not to care that I was totally naked and three cops were watching.

When I turned off the water I was freezing, goose bumps all over. The sergeant said, "Tell you what. We won't take April in on the warrant, and you'll do me a little favor." He was sitting on a chair with a towel covering his lap. "If you want the towel, come and get it." I don't remember if he still had his pants on underneath or not, but I went and got the towel. I knew what I was supposed to do.

Borden and Mansky were still in the doorway, watching. I closed my eyes really tight and tried to pretend I wasn't there.

Afterwards the sergeant left, Borden gave me my clothes, I got dressed, and they took me back downstairs to the cell. April was still out cold on the floor.

When they let us out a couple hours later we found Corey. He still had some dust, and we all got high again.

I never told April what happened with the sergeant. She thought some things were okay for her to do, but not for me, so I think she would've been really pissed. But it didn't bother me much, what I did. I was too high to care at the time and, anyway, I did it for April. I only did it for April. 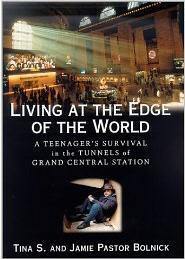